Every year, hip-hop publication XXL produce a list of 10 of the biggest up-and-comers in the rap genre; the staple figures they deem to be the flag bearers of a new era of rap music. Ever since it’s induction in 2007 fans have eagerly awaited the artists selected as the “Leaders of the New School” as XXL themselves put it in their first edition. Here we will look at some of the best cases of these covers, mainly the artists who have gone on to live up to their hype and beyond, but also the very worst cases, those who faded into irrelevancy not too long after their cover appearance.

Now obviously I am not expecting all of these artists to have had a successful decade long career, but I am fairly sure I’m not alone in saying I recognise at most three artists in that list. Lupe Fiasco was of course the big success story of this list and has gone on to prosper with some really great music afterwards (listen to his Tetsuo & Youth album it is pretty great). Joell Ortiz and Lil Boosie had relative success but are fairly unknown entities these days and as for the others? Your guess is as good as mine.

After a year break in 2008 this cover in ’09 was a huge milestone in the history of the Freshman List, it gave massive props to Internet rappers and demonstrated how incredible of a platform putting your music online can be. The obvious stars of the show for this cover were and still are Wale, B.o.B and Kid Cudi, even if they have all been battling personal demons in recent times. B.o.B was a chart topper back then and is now a bizarre member of the Flat Earth Society, while Wale has had to fight back after being dropped by his label and is now trying new avenues. Kid Cudi is an icon of the modern hip-hop era but has fought mental health battles aplenty recently and the sooner he can dig out of the hole the better. There are a few cool other names here but for the most part, they’re the three worth knowing.

2010 was a solid year for the Freshman list, with the likes of J Cole and Big Sean going on to be some of the biggest names hip-hop has to offer these days. Wiz Khalifa also found great commercial success in the early days of his career and has the second most viewed video on YouTube with his Fast and Furious soundtrack song ‘See You Again’. Freddie Gibbs and Jay Rock are two immensely talented rappers still plying their trade and wowing rap connoisseurs today, the latter of which is one of the big names on Top Dawg Entertainment, the first from the label and certainly not the last to make the list. The other names are mysteries and the hype soon died down for them sadly.

Now there are a few big names on this list, it certainly has a case to be called one of the best covers of all time and I think one man in particular helps that case. Kendrick Lamar being on this list is such a major statement and what he has gone onto achieve is nothing short of magnificent for XXL to show him off and look back at what he once was. He is now the best rapper alive and is joined by decent company on this cover. Big K.R.I.T. is a conscious underground rapper for the ages, Meek Mill and Mac Miller have been commercial hits for years while YG is Still Brazy and Lil B is the Based God, what more needs to be said? Yelawolf has become a bit of a meme over the years and despite showing promise, Cyhi the Prynce is now a nobody. 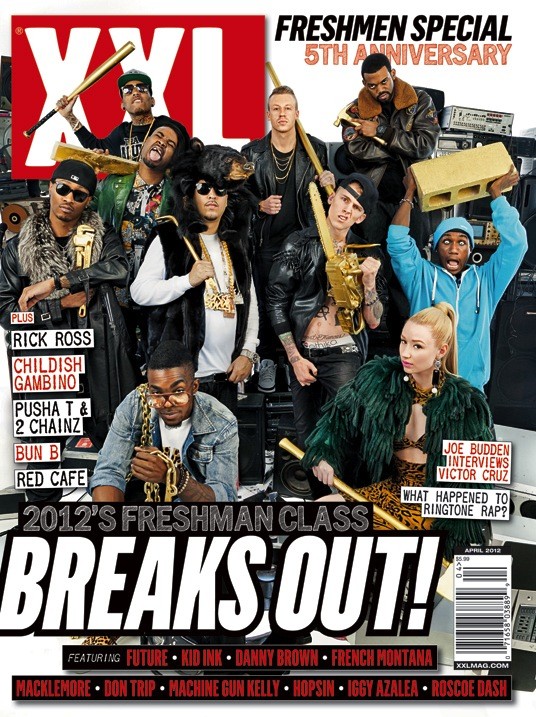 2012 was a strange year. It was amazing that a female rapper had finally made the list but unfortunately that female was Iggy Azalea, a serious dose of white trash. She was joined by two other meme style white rappers in Macklemore and Machine Gun Kelly, both of whom have smashed it in the charts but sold their souls to the devil and made crap music as a result. Speaking of crap music, French Montana and Hopsin are on this list too. Jesus this list was bad. Luckily we had Future and Danny Brown here, two of hip-hop’s most loveable artists flying the flag and holding the fort for an otherwise diabolical list of mainstream dweebs.

After 2012’s meme-fest we needed a boost from XXL and that is exactly what they gave us. This is my personal favourite XXL list and with the exception of one or two artists, every single rapper on here is still relevant and solid in the genre. The diversity of having Travis Scott’s vibe mixed with Logic’s flow and Joey Bada$$’ message worked a treat and gave us a balance across all sub-genres of rap. Two more TDE members made the list in ScHoolboy Q and Ab-Soul, two of their shining lights alongside Kendrick and Jay Rock. Chief Keef was telling us all what he doesn’t like and Action Bronson was imitating Ghostface Killah but sounding too cool to complain about it. Trinidad James is a bit trash but you can’t have it all can you?

Another great year for the XXL guys who put together a stellar list, their longest one ever with 12 rappers making the cut. The obvious big names are Chance The Rapper, Vic Mensa and Ty Dolla $ign with Kevin Gates and Rich Homie Quan also being worthy of mention. Their cypher was hella fun and it made the world fall in love with Chance The Rapper, who would have thought he would go onto win three Grammys in 2016? A strange omission from this list was, for me at least, Atlanta’s own Young Thug; a man who gained serious heat from his ‘Lifestyle’ hit and has since gone on to be a hip-hop megastar. Isaiah Rashad also became the fourth and most recent member of TDE to make the cut which I was hyped about because he is great.

This is such a strange one. 2015 was a blossoming year for hip-hop, with Kendrick dropping a masterpiece, Drake claiming the throne as King of chart music and Future and Travis Scott dropping trap classics; so how on earth did this cover end up so bad? Fetty Wap was the hottest new commodity in music in 2015 when he came out with massive hits like ‘Trap Queen’, ‘679’ and ‘My Way’ but what has he done since? Absolutely nothing, but I forgive him because he’s got one eye and I don’t like to pick on him. GoldLink and Vince Staples are two phenomenal artists who are some of my favourites these days so that was completely understandable, as is OG Maco who had heat from ‘You Was Right’ and a couple of other big hits. The rest? Complete write-offs I am afraid, the breakthrough of more female artists was pretty cool I guess but what have those two done since then?

If you were to sum up how mental a year 2016 was for rap music, you would need to look no further than some of the wavy dudes on this XXL list. Lil Yachty was a 19 year old from Atlanta who had a lisp and red braids, Lil Uzi Vert stapled his face and had pink dreads while Kodak Black literally couldn’t speak let alone rap. The most bizarre thing about this list is that they are basically all still going strong, 21 Savage is a multi-platinum selling artist while Uzi made song of the summer with XO TOUR Llif3 and Anderson .Paak is signed to Dr. Dre’s Aftermath label. Denzel Curry is a great rapper and I am excited to hear from him again soon while Desiigner has sunk badly since the release of that absolutely diabolical ‘New English’ mixtape. Kodak Black is a big loser and a massive pleb who does horrible things to women so I would rather not endorse him.

This cover got a lot of flak initially but I think they picked the best artists they possibly could have, these are the artists who are popping off most in 2017 and they should be acknowledged for that. Kamaiyah is doing big things for female rap as well as bringing back a great West Coast sound which I rate highly. Ugly God is a walking, talking meme but he is genuinely a very good rapper, as is Kyle but he would rather sing nursery rhymes. Playboi Carti brought us Magnolia so must be cherished and protected at all costs and artists like A Boogie and MadeinTYO don’t really do it for me but I can clearly see why they are popular. Oh yeah, and the small matter of that freaky individual and all round cold blooded dickface XXXTentacion too. His cypher performance was the equivalent of a teenage boy who has had his Xbox Live account cancelled by his mum and his personal antics are vile so much like Kodak Black, he doesn’t deserve the support.